On Saturday, May 19, Xaverian Brothers High School celebrated the Commencement of the Class of 2018, Xaverian’s 52nd graduating class. Diplomas were conferred to the 178 graduates by Headmaster Brother Daniel Skala, C.F.X., Ph.D. and Principal Jacob Conca ’94, Ph.D. Collectively, these young men were accepted to 218 different colleges and universities. They have committed to continue their academic careers at top institutions such as Yale, Brown, Bates, Georgetown, Tufts, BC, Wake Forest, and Rensselaer.

The valedictorian and salutatorian for the Class of 2018 were both National Merit Scholar Finalists. They are Michael Fitzgibbons (Valedictorian) and Armaan Dhillon (Salutatorian). 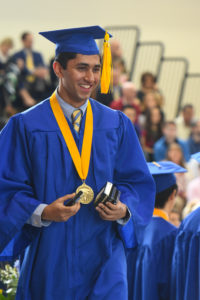 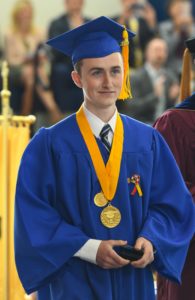 Michael, a three-season track runner for all four years of high school (and this year’s recipient of the Student Athlete of the Year award), is also a computer programming enthusiast, fluent in HTML5/CSS3, Java, Javascript, Python, and Swift, and currently developing his own programming language. Michael is a member of the National Honor Society and the Spanish National Honor Society. He received four gold medals for interest and excellence in Computer Science, English, Mathematics, and World Languages (Spanish). Michael will attend Northeastern University.

In the valedictory address, Michael Fitzgibbons encouraged his classmates to continue to live the Xaverian call to be men of integrity who make good things happen:

One of the main ideas which Xaverian sought to instill in us is the idea of becoming men of integrity. Though this phrase may have been uttered a thousand times in our four years here to the point where most of us roll our eyes when we hear it, it is significant in answering the question of why we are here today. A lot of us will do important things and become leaders in the world. The world needs men who will do the right thing with their power, acting with integrity. We cannot trust that good things will simply happen. We need to be the people that go out and make them happen.

Each year, the members of the graduating class and faculty nominate a senior for the Xaverian Award, the highest honor bestowed. This year’s Xaverian Award winner was William Perry. Brother Dan praised William’s “stunning embodiment of Theodore Ryken’s vision of a band of brothers who mutually help, encourage, and edify one another.” He said that William will live in the school’s history as one of Xaverian’s greatest role models: “His humility is authentic and a shining example of a young man who is comfortable in his own skin and true to his convictions. He has never pretended to be anything other than himself, and that has made all the difference.”