St. John’s Preparatory School Celebrates the Year of the Rooster 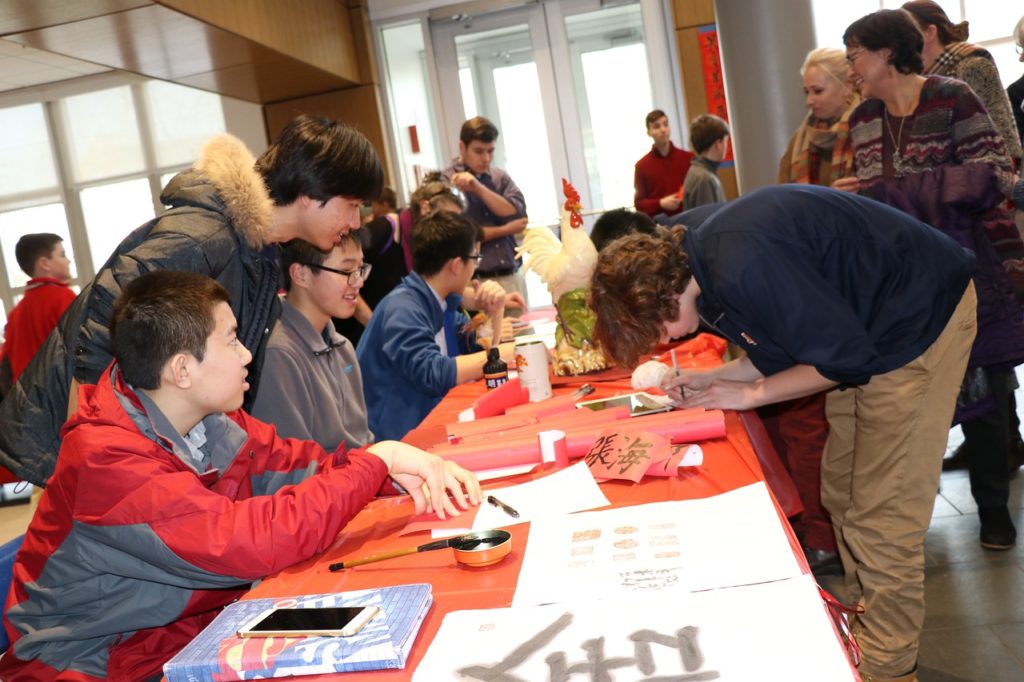 Chinese New Year is the most important traditional festival in China. For Chinese students studying in America, it’s the perfect chance to share their culture with classmates while staying connected to customs back home. So after school on January 26th, St. John’s Mandarin classes, the Multicultural Affairs and Community Development team, and a group of international students hosted quite an awesome party in Kennealy Commons. They transformed the space with vibrant Chinese masks Middle School students had made in art class, along with pops of red lanterns and calligraphy scrolls. See video from the event here.

This year Chinese Lunar New Year falls on Saturday January 28th, and will be the year of Rooster. Brandon Li ’17, who came to St. John’s from China four years ago, explained to the audience the significance of the Chinese New Year traditions. He said it is a special time for families to be together for celebrations that include an annual reunion dinner, setting firecrackers, giving lucky money to children, ringing the New Year bell, sending greetings, and traditional dancing.

Two Middle School students Jack Hartfelder ‘23 and Cole Hosmer ’23 kicked off the party by demonstrating the traditional lion dance. Jay Zhou ‘17 and Christian Murray ‘17 then shared an opening prayer, first offering it in English and then in Chinese. One of the many highlights of the event came when the Prep received a Buddha's wish for a happy Chinese New Year from Venerable Jue Qian, Master from Fo Guang Buddhist Temple in Boston. The prayer asked for peace, health, wealth and happiness in the New Year for all.

Special thanks to all the students who participated and everyone who made the day possible, including parent volunteers and the SJP facility group, Amir Ghali, Jesus Colon, Michael Hamill, and Seaneen Breen for all of their hard work.  More Chinese New Year photos can be seen at here.