On August 21st, Kyle Snyder (OLGCHS class of '14) became the youngest American wrestler to ever win gold in the Olympic games. Wrestling in the men's 97kg freestyle, Synder began the day dominating the competition. He beat wrestlers from Cuba and Romania by a combined score of 17-3. His only scare came in the semifinal round when Georgia's Elizbar Odikadze jumped out to a four-point lead early in the match. Snyder showed his resolve and battled back to win the match 9-4 and earn a spot in the gold medal match.

In the gold medal match, Snyder faced Khetag Gazyumov, the No. 3 wrestler in the world from Azerbaijan. In a grueling match that came down to strength, endurance, and strategy, Snyder came out ahead 2-1 and made history. 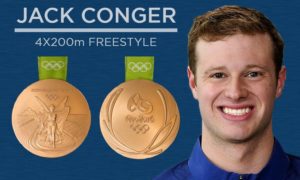