GC Students Help Raise $110,000 for The Leukemia and Lymphoma Society

Kyle's Army, consisting of Kyle Fritschi, Chris Morris, and Jake Wright, raised over $95,000 and was awarded 1st Runner Up out of 24 teams in The Leukemia & Lymphoma Society's Student of the Year Campaign. The team was also presented with one of three Citizenship Awards and the Community Outreach Award for "facilitating high engagement of the community based on their campaign creativity, passion, reach and leadership." Team FALL, consisting of Keelin Ferris and Mallory Brendel, helped raised an additional $15,000.

The entire campaign raised a record breaking total of over $851,000. Congratulations to both Team FALL and Kyle's Army. 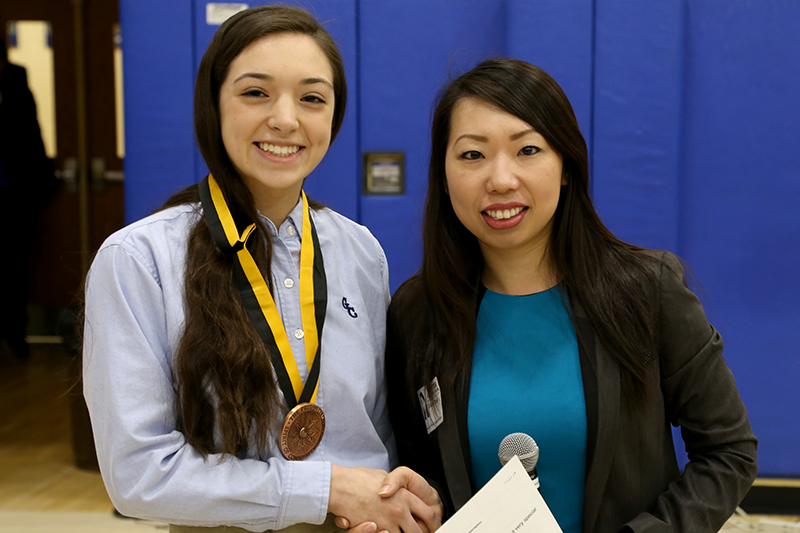 Earlier this month, Lauren French was presented with the 2017 Prudential Spirit of Community Award during Large Community.

Prudential Financial, in partnership with the National Association of Secondary School Principals, sponsors a national awards program to honor middle level and high school students for outstanding volunteer service. Thousands of young people across the country were considered for 2017 Prudential Spirit of Community Awards. From those candidates, a select few in each state and the District of Columbia were selected for special recognition.

Lauren was recognized for her recent diaper drive, which provided more than 10,000 diapers to an organization that provides essential items for babies from low-income families. She was presented with the Prudential Spirit of Community bronze medallion, and it is hoped that her service inspires other young people to serve their community as well.